We often call Hilton Head Island “paradise.” But for nature lovers, this little island of ours really is a true paradise.

There is such abundant — and unique — wildlife on our barrier island. Not only can you expect to see all kinds of different oceanic life, but there are also the marshes, which are a diverse ecosystem all on their own.

All of the different habitats available on and surrounding Hilton Head lead to a diversity of wildlife unlike any other.

Here are some types of wildlife you can expect to see while living on or visiting our beautiful Hilton Head Island:

Creatures of the marsh

One of the most well-known types of wildlife on Hilton Head is, of course, alligators. And yes, they’re everywhere! During mating season especially — from May through early June — don’t be surprised to see gators in unexpected places: stalling traffic on a busy street, strolling through a parking lot, on somebody’s front porch … When they’re looking for a mate, they’ll wander much more than usual. The rest of the year, you’ll typically only see them in or near lagoons and marshes, though occasionally they’ll swim into the ocean and you’ll notice them in a marina or at the beach. And while they look scary — and should be respected — they really don’t like to be around people. So as long as you follow these safety tips and absolutely NEVER feed an alligator (it’s illegal!), you should be able to observe these magnificent beasts from a safe distance without any worries.

The marshes are full of tons of other wildlife aside from alligators as well: You’ll see turtles, giant bullfrogs and other types of frogs, tiny fiddler crabs and the larger blue crabs, plus shrimp, oysters, and mussels.

Then, there are the birds: Great Blue Herons that are so large you might feel like you wandered into Jurassic Park on your first sighting. The slightly smaller Great Egret, whose gorgeous white plumage stands out among the green marsh grass. The Wood Stork, which is almost as large as the Great Blue Heron and North America’s only native stork. And, of course, your many magnificent birds of prey, including the Bald Eagle, ospreys, and more. If you’re lucky, you might even catch a gorgeous, pink Roseate Spoonbill visiting one of our wetlands in the spring or summer.

Bird lovers will never be bored on Hilton Head. Not only is there an extremely diverse range of bird species in our marshlands, but the island’s beaches also see a large variety of both native and migratory birds.

Everyone loves the adorable little sandpipers who hop along the beach hunting for shells and other tiny sea creatures. If you’re here in the winter,  you can also see similar tiny piping plovers, red knots, and other migratory shorebirds. And, of course, you’ll see a ton of seagulls and pelicans.

Dolphin sightings are extremely common in the Lowcountry! But they’re not the only sea creature you can keep an eye out for.

Along the beaches — especially at low tide — look for blue crabs, ghost shrimp, horseshoe crabs, starfish, clams, mollusks and sand dollars. Just make sure you never try to take a live creature from the beach! That includes sand dollars, which are actually living creatures, not shells. Read more here to learn how to distinguish the difference between a sand dollar’s exoskeleton (the “shell”) and a live sand dollar. Taking any live creature, including sand dollars, from a Hilton Head beach will result in a heavy fine. 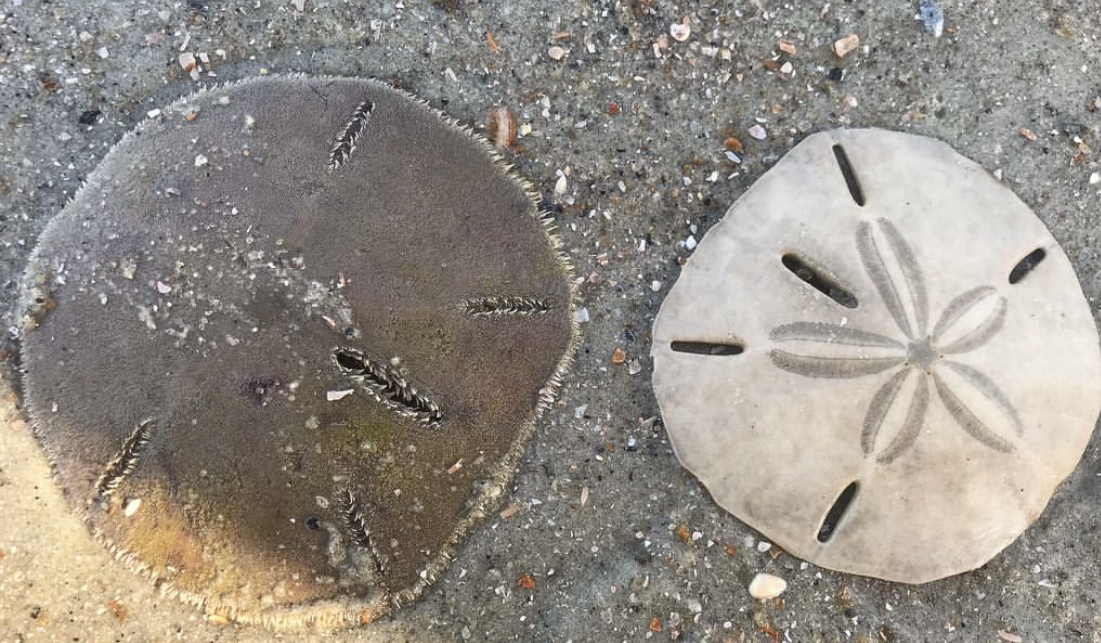 Live sand dollars are brown with tiny, moving “legs” on their underside, as shown on the left. The exoskeleton is what’s left after a sand dollar dies — and the “shell” that you can take home — as seen on the right.

If you’re walking along the docks or taking a boat ride, keep an eye out for sharks, the occasional manatee and sea turtles! Sea turtle nesting season typically begins in May and ends around September. Hilton Head Island gets a ton of nesting loggerhead females, plus some leatherback sea turtles! Nests are roped off by trained volunteers with the Hilton Head Island Sea Turtle Patrol, who keep a tally of and monitor these nests through hatching season. Because of the sheer amount of nesting sea turtles the island sees each year, the local government has put a variety of ordinances in place to help protect the turtles. You can find those here.

If the creatures of the marshes and wetlands, beaches and ocean aren’t enough to make you want to move to Hilton Head Island, picture this: You wake up in the morning, grab a cup of coffee and sit on your deck to watch deer graze in your backyard. And they’re not the only white tails you can see — you catch a glimpse of a tiny cottontail as a rabbit hops merrily through the grass. Not far away, you watch a variety of colorful songbirds at your bird feeders. You can hear the waves in the distance, and know that a ton of other magnificent birds and creatures are just a short walk away. You’ve found your paradise.